Incorruptible: A Dark Comedy of the Dark Ages by Michael Hollinger

Welcome to Priseaux, France, c. 1250 A.D.: The River flooded again last week. The chandler’s shop just burned to the ground. Nobody’s heard of the wheelbarrow yet. And Saint Foy, the patron of the local monastery, hasn’t worked a miracle in thirteen years. In other words, the Dark Ages still look pretty dark. All eyes turn to the Pope, whose promised visit will surely encourage other pilgrims to make the trek and restore the abbey to its former glory. That is, until a rival church claims to possess the relics of Ste. Foy- and “their” bones are working miracles. All seems lost until the destitute monks take a lesson from a larcenous one-eyed minstrel, who teaches them an outrageous new way to pay old debts…

Running at the Ritz Theatre Company in Haddon Township from September 13 – 30, with tickets available online at www.ritztheatreco.org!

“Incorruptible’s story begins with us enjoying the privilege of presenting the work of a local playwright, Michael Hollinger, on our Main Stage,” explains Bruce Curless, Producing Artistic Director at The Ritz Theatre Co. “Born in nearby Lancaster, PA, Michael Hollinger is currently an associate professor of theatre at Villanova University. To me, the show’s full title: Incorruptible: A Dark Comedy about the Dark Ages is an accurate description of the numerous plotlines.

For the non-Catholics reading this — deceased holy people who don’t decompose are what is called an “incorruptible.” It’s estimated that only about 1% of the Catholic Church’s saints fall into this category; these include: St. Bernadette of Lourdes, Pope John XIII, St. John Vianney, St. John Damascene, St. Catherine Laboure, and a few others. The state of decomposition can be non-existent, extremely slow, or result in mummification, but cannot occur from extensive embalmment or other explainable natural means. “Relics,” meanwhile, are portions of a saint’s body that have been removed and placed in other spots so that the faithful can make pilgrimages to a myriad number of religious locations to request the saint’s intersession for assistance. Thus feet, livers, and other internal and external body parts are disseminated throughout the globe in order to spread the miracle wealth (so to speak). For example, while the body of Mother Cabrini (also known as St. Frances Xavier Cabrini) is housed in New York City in the chapel at Mother Cabrini High School (just off the A Train), her head is located in Italy. Which makes you realize — EBay, in one form or another, has been going on for a very long time…

Playwright Michael Hollinger bases his farcical script on actual things that occurred during the Dark and Middle Ages. He takes some artistic license, of course, but the stealing and trafficking of saints’ body parts was in high demand during these times and so his general story line could very well have happened just about anywhere in Europe. In this case, he takes St. Foy (a 13 year-old girl martyred in the fourth century, who is an actual saint still popular in Europe and Latin America) and places the action in a monastery at Priseaux, France. There the monks are trying to figure out how to bring in an influx of cash so the monastery can continue its mission to help the needy and stave off the starvation of the clergy. The monastery’s patron saint (Foy) has not produced a miracle in thirteen years and the pilgrims, as well as the local people, have stopped coming looking for assistance and paying an obligatory donation to view the saint’s relics (her entire skeleton). Instead the faithful have moved on to other more active and celebrated holy sites. Even for churches in the dark ages it was all about public relations and staying current with constant miraculous output. Which is not that much different than the cult of celebrity worship and maintaining celebrity status today.

When St. Foy’s identity is stolen (not just a 21st century problem!) the monks face starvation or accepting drastic measures to keep the order afloat. Ironically, even the brothers of Priseaux have a hard time believing in their patron. When a murdered Jewish money changer arrives on their doorstep at the same time a one-eyed, itinerant minstrel stumbles through town, Brother Martin hits upon the idea of selling off the monastery’s graveyard full of bodies (“We could sell him — for parts!”) and suddenly things begin looking up for the Abbot of Priseaux and his colleagues as they traffic in the sale of “saintly” heads, feet, and collarbones. Until the Pope announces he will be making a visit to see their incorruptible, which unfortunately they don’t actually possess… 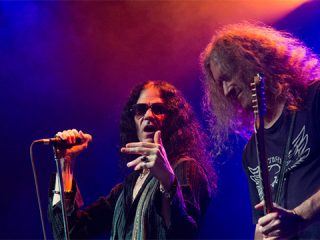