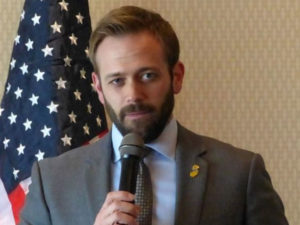 The state’s new acting director of tourism told local business owners Thursday he is looking at ways to promote one of New Jersey’s leading tourism destinations.

With 30 miles of beaches, Cape May County is the second leading tourist destination in New Jersey outside Atlantic County, generating 15 percent of the state’s tourism revenue.

Jake Buganski, New Jersey’s acting director of travel and tourism, called Cape May County the state’s “bread and butter” when it comes to tourism.

Business owners were eager Thursday to hear what he could do to help boost tourism in the county and to bring more funding.

Tourism, New Jersey’s seventh largest industry, has a total economic impact of $43.4 billion and employs more than a half-million people.

Buganski, speaking at the chamber’s monthly meeting at The Reeds at Shelter Haven Thursday, said the division should take Cape May County’s contribution into consideration when awarding grant money, which it now does not.

“Fifteen percent of all tourism in the state in one county is nothing to sneeze at,” he said.

The bigger problem lies in the allocation of occupancy tax dollars, Buganski said, which the division does not have power to change.

He said revenue from the 5 percent tax for hotels and motels is split: $16 million for arts and culture, $9 million for tourism and $2.4 million for history initiatives.

“That’s all the money that we have in the state to promote tourism,” he said. “We’re at a real disadvantage as far as that’s concerned.”

Buganski said the division will focus on leveraging the Jersey Shore’s heritage in its marketing campaign. A new heritage tourism website will be rolled out next month.

In addition to generating revenue, the county’s tourism industry generates a large portion of its employment. Buganski said the Division of Travel and Tourism is working with higher-education organizations to make sure students receive training and remain in the community for employment.

Buganski, a Gloucester County native, was appointed in December after working as president of the visitors’ bureau in the Southern Finger Lakes of New York. He also was executive director of Visit South Jersey, one of the state’s official Destination Marketing Organizations.