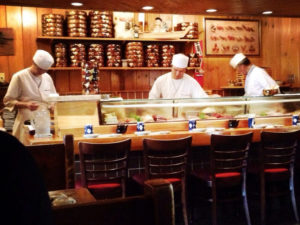 The 2017 James Beard Foundation Awards released its semifinalists for outstanding restaurant and best chef on Wednesday morning, and two Collingswood restaurants have been tapped.

Sagami, long a favorite sushi restaurant in the region, was nominated as Outstanding Restaurant, and Chef/owner Joey Baldino of Zeppoli was nominated for Best Chef in the Mid-Atlantic region.

When reached for comment, owner Chizuko Fukuyoshi had not yet heard about the nomination. She owns Sagami with her husband, Shigeru Fukuyoshi.

“We don’t pay attention to these things,” Fukuyoshi said. “We do our best. We are very happy because other people think our restaurant is good.”

Fuji is reborn as Royal Izakaya
In Philadelphia, Michael Solomonov (Zahav) is nominated as Outstanding Chef, the only regional nominee. Zahav was also nominated for Outstanding Service and Rising Star Chef of the Year (Camille Cogswell).

Jesse Ito, formerly of Fuji in Cinnaminson and Haddonfield, also was nominated as Rising Star Chef of the Year for his work at Royal Izakaya in Philadelphia.

Legendary restaurateur Stephen Starr is nominated for his Starr Restaurant Group, which includes Serpico, Upland and many others. Ellen Yin of Philadelphia’s High Street Hospitality Group also got a nomination in this category (Fork, High Street on Market).

Both Elizabeth “the Bread Lady’’ Degener of Cape May’s Enfin Farms and Tova du Plessis of Essen Bakery in Philadelphia are nominated in the Outstanding Baker category.

In addition to Baldino, regional nominees for Best Chef in the Mid-Atlantic Region include Scott Anderson of Elements, Princeton; and Nicholas Elmi for Laurel, Rich Landau for Vedge, Cristina Martinez and Benjamin Miller of South Philly Barbacoa, and Greg Vernick of Vernick Food & Drink, all of Philadelphia.

The awards will be announced on April 25 at Chelsea Piers in Manhattan.