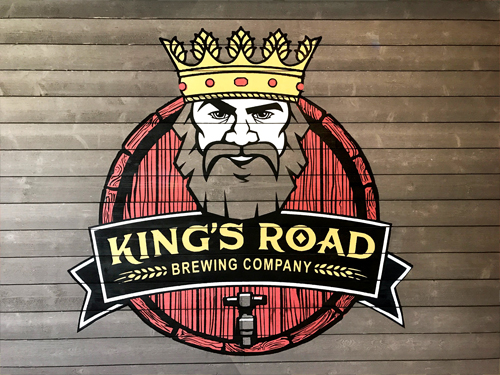 Located on Kings Highway, King's Road Brewing Company is the brainchild of Jeff Farrell, Pete Gagliardi, Bob Hochgertel, Chris Thomas, and Victoria Cummins. Together this group of individuals is a superpower, each deeply involved in their town of Haddonfield and committed to bettering their community. Built in 1681, Kings Highway, or better known as the King's Road by the colonial assembly who built it, stretched from Burlington City through Haddonfield, all the way to Salem. A brewery built on such a historic road should naturally be named for it.

Adding a brewery to the historically dry town was a natural step for them. After seeing other towns flourish with activity with the addition of craft brewery, the group wanted to fertilize their own community and help it thrive. Haddonfield, boasting so much charm already that it's about to burst, was a natural fit.

King's Road Brewing Company is located, at least as of this writing, coincidentally enough in the old Gibbs' Tavern and Smithy, a building dating back to 1777. What better place to house a friendly downtown craft brewery? Perhaps it was a sign or synchronicity, but it seems that Mr. Gibbs was missing his beer.